‘This is the place that will put Weymouth on the map,’ whispers the man sitting at the table beside mine as he tucks into his beef tenderloin. Moments later my own arrives and it is succulent, knife-through-butter stuff, served on chef’s own ratatouille. If ever ‘phenomenal’ could be used in its proper context it would be for such a moment: the meal served to me this evening at Les Enfants Terribles was phenomenal. 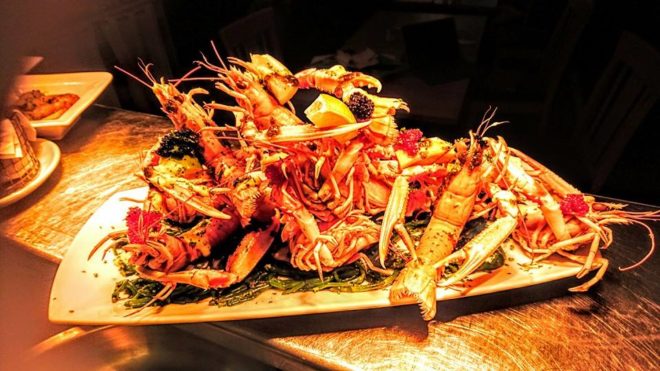 Another diner ahead of me forages through her lobster and crab bisque and raves. ‘Just amazing,’ I hear her say, ‘unbelievably perfect’. Her words are echoed these last 12 months among the oodles of reassuring compliments on Trip Advisor and a glowing review in Food & Drink, Dorset. If I were being bold I would say word is finally out and owners Eric Tavernier and his wife Joanna have begun some sort of, well, gourmet renaissance in the town.

But as important such a revival is for Weymouth – and very welcome – it was never the point of the place. ‘Jeannie Flood who was selling it was so lovely,’ Chef Eric told me. ‘She wanted another family to have the opportunity of running a seafood restaurant by the sea.’ For the enterprising couple, to serve great food done well was the only thing that mattered. 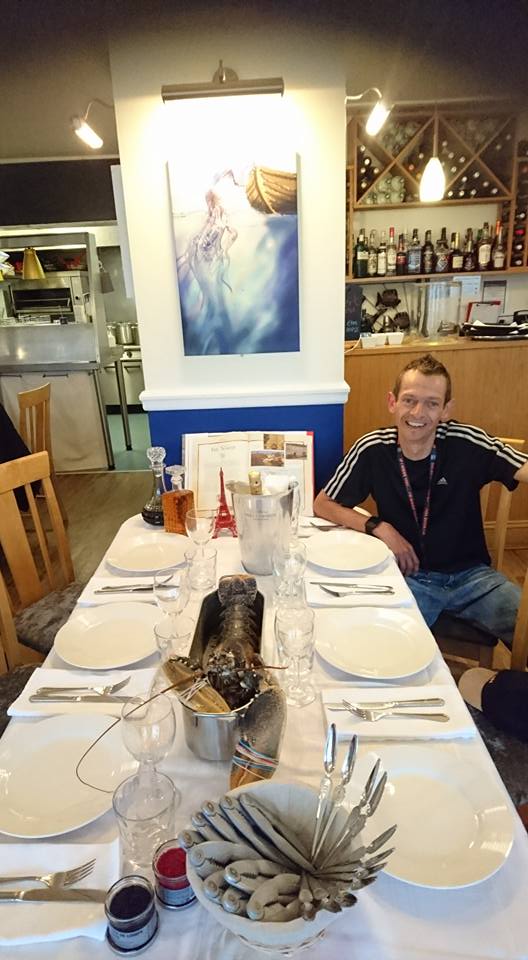 ‘A good quality seafood restaurant where customers come to relax and soak up some enfants terribles atmosphere,’ adds Eric as he prepares a Seafood Linguini. From where he stands in his kitchen he can see nearly all of his diners and consequently they can see him. It’s an arrangement he hopes adds a special vibe to the experience – because, he says with a wry smile, ‘It’s personal’.

Les Enfants Terribles looks out across the old docks of Weymouth to the multi-coloured harbour houses of 19th Century Nothe Parade and the Weymouth Sailing Club. A few metres eastwards from the Harbour Master the restaurant occupies the site of what was previously Floods Seafood restaurant. The new place revels in its barely disguised Frenchness; it is airy, tasteful, un-preened and a place to which foodies of Weymouth (including other chefs) come back time and again. 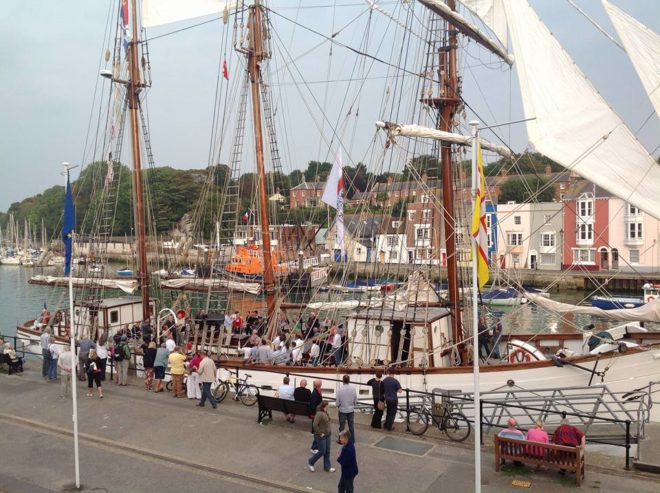 Eric and Joanna launched the restaurant in 2016 to critical acclaim and instantly it was a beacon of fine-food values amid an ever-increasing fast-food culture. Very French; very unpretentious. ‘Just great food cooked individually by hand, plate by plate,’ says Chef Eric softly – one of his many Gallic tenets (the other being ‘Every day above ground is a good day’).

Monsieur Tavernier fell in love with good food from an early age. Training at catering college in France gave him his practical foundation. ‘I only ever wanted to cook,’ he said. ‘I would look at food pictures in magazines as a boy.’

After meeting British-born Joanna (c’était le coup de foudre) and moving to London, Eric cheffed his way through some of London’s top professional kitchens (his favourite, Beach Blanket Babylon in Notting Hill). The pair then travelled the world for a decade; les deux habitués of the cuisines of Thailand, Australia and the UAE among others.

But so too were they on the lookout for a business to buy, and while in Abu Dhabi Joanna saw on the internet a Weymouth restaurant for sale. Having both visited the Dorset town in the past it seemed like the perfect location in which to begin a new adventure. The time had come to uproot, to push off from the edge of the swimming pool. 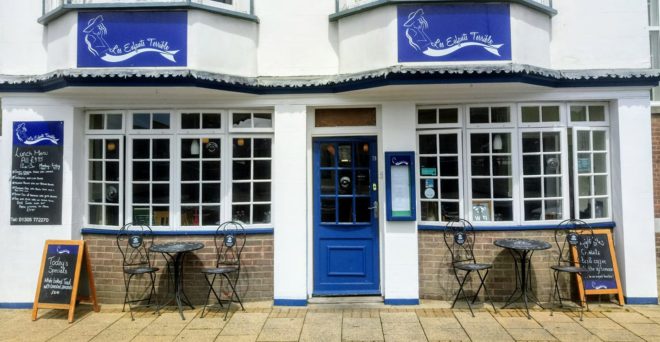 I feel compelled to ask him at this point why my steak tenderloin beats anything I have tasted before, hoping he can tell how far from flattery I am.  ‘We use the best beef filet we can find. And I do our ratatouille the classic way,’ he replies. ‘We make our own stock and it takes about two or three days to have a spot-on red wine glaze, we use the best beef around, and I finally I cook the steak… Do I need to say anymore?!’ Knowing a little of the French pride in their cooking techniques I sense any further probe will be met by stern resistance.

The steak may have me excited but for what excites Chef Eric the answer is simple: food. And from where I sit watching him work at the pass tonight that much is obvious. When asked what people think of him he tells me in a word, ‘obsessed’ and tonight his energy and essence show it. His background is food; his training is food; his career – food. He is perfection in motion and the results are, naturally, sensational. 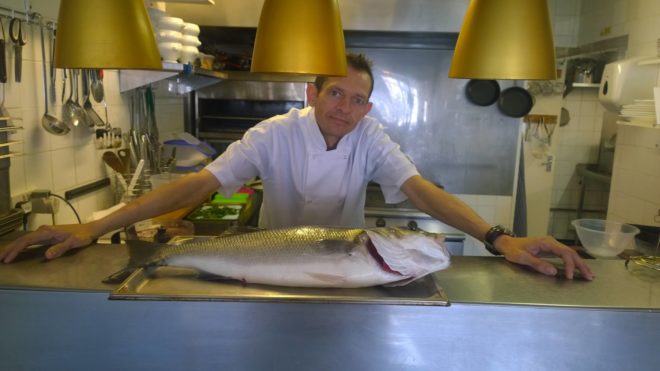 About others’ cooking, he admits to being fussy and not easy to please. ‘I have my own preferences about things,’ he tells me. ‘I have classic training so I know if things are being done properly or if they’re being done by amateurs.  I watch cookery programmes when I have any time to myself (normally between 1 and 2am!) and am always thinking about food, menu’s dishes, seasons, flavours.’

On the subject of flavour, he teases me to try his sea bass cooked en papillote as I watch the waitress carrying the dish to a family of four nearby. It looked and smelt amazing – a signature dish of which he is obviously proud. Whole baked seabass (filleted) in foil Papilotte with home-grown fennel, leeks, carrots, orange, thyme and Pouilly-Fume white wine. The recipe, he tells me, can be found on Menu Dorset’s online magazine. 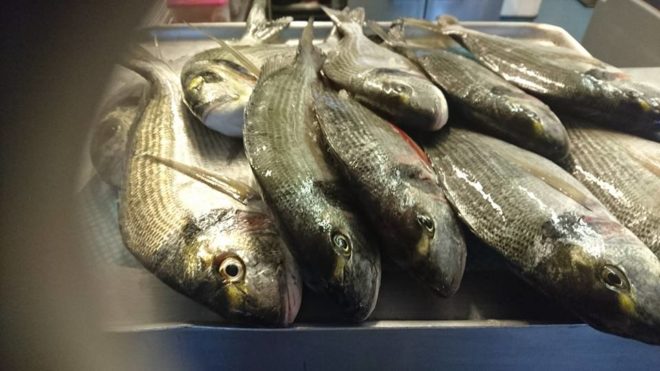 Of the Pouilly-Fume white wine, I ask from where the inspiration came. ‘I have seen Rick Stein (my food hero as far as I am concerned, and if I can say, you have to read his autobiography “Under a mackerel sky”) using Sauternes in one of his recipes so I thought to counteract the sweetness of the oranges and carrots in our dishes I would use the acidity of the Pouilly fume wine we already have on our wine list.’

In the modern tradition, what you see on the restaurant’s menu are dishes of every viand, not only sea-based (although it would be fair to say that marine is big at Les Enfants Terribles). There is chicken breast stuffed with goat’s cheese, there is gazpacho, there is beef. But none is ordinary and each is chef’s unique creation.

‘You will find all the classic things on my menu such as Moules Mariniere and fishcakes but I’ll do something extra,’ the Frenchman says (with what might have passed for a clin d’œil). ‘The fishcakes have capers in. The sea bass has fennel in. I test everything that goes out of my kitchen. Every single dish.’ 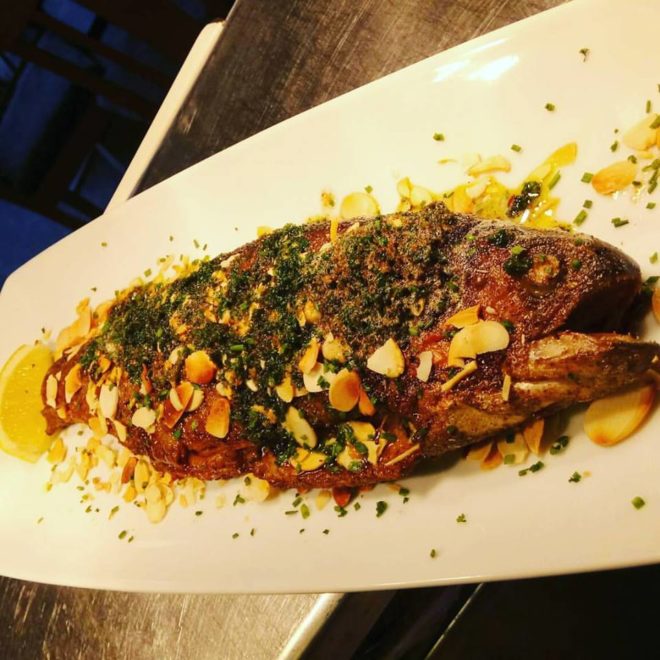 On what makes a great chef he says, ‘Taste.  Taste and taste.  Keep making sure that everything that you serve is the best taste you can get from the ingredients.’ And on that point, the restaurant’s ingredients are locally sourced. ‘All our crab is from Portland,’ he tells me. ‘Our fish sea-to-table travel distance is about 4 metres.’

My meal ended on a high note: a Chocolat Delice with crème fraiche looked pretty on the plate and tasted yet better. I left there wondering whether Les Enfants Terribles represents for Eric an ancestral alma mater, a return to the gastronomic heritage of his homeland. The passion which seems to exude from the man’s demeanour says to me more than restauranteur. Of Eric, there is something greater, and suggestive of his discovery of a secret path. 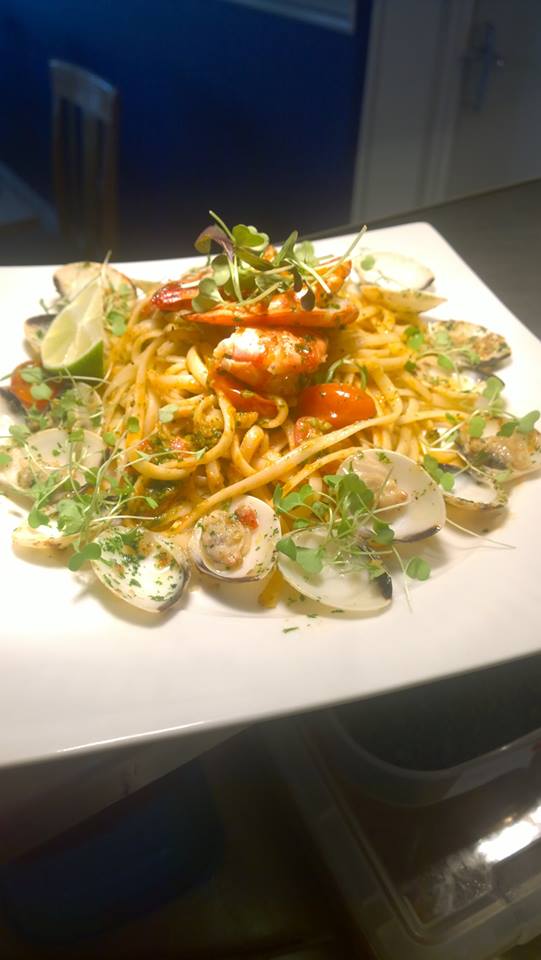 His passion is to be shared at any given moment. ‘I try my best to visit every table,’ he says. ‘Being the chef and owner it is important for me to get out from behind the pass in the kitchen and meet people.  I want to know what they think.  I value their feedback.  I have lots of return customers but I also get people give me their opinions.  That’s one great way to grow.  Having a restaurant is a fast way to get involved with a community because over the past 20 months I’ve met so many people.  It’s great.’

Lastly, I am granted a sneak peek into the future and told of the Taverniers’ exciting, game-changing plans for the restaurant. The introduction of a seasonal degustation menu instead of a set carte is one such proposal (in contrast to its waning in other parts of the UK). ‘Proper food, proper dishes,’ Chef Eric enthuses. ‘I want to say close to my earlier memories of food.’

And we look to a time when Eric and Joanna’s work/life balance is greatly restored. For, while blessed with children, the family has little time to live straightforwardly. Les Enfants Terribles is their life and at the moment normal-ness is a difficult needle to thread. I ask father and husband Eric what he pictures as his ideal way of being. He tells me that eating other people’s great food, fishing (his big love) and sitting at a table with his wife and kids would spell perfection. 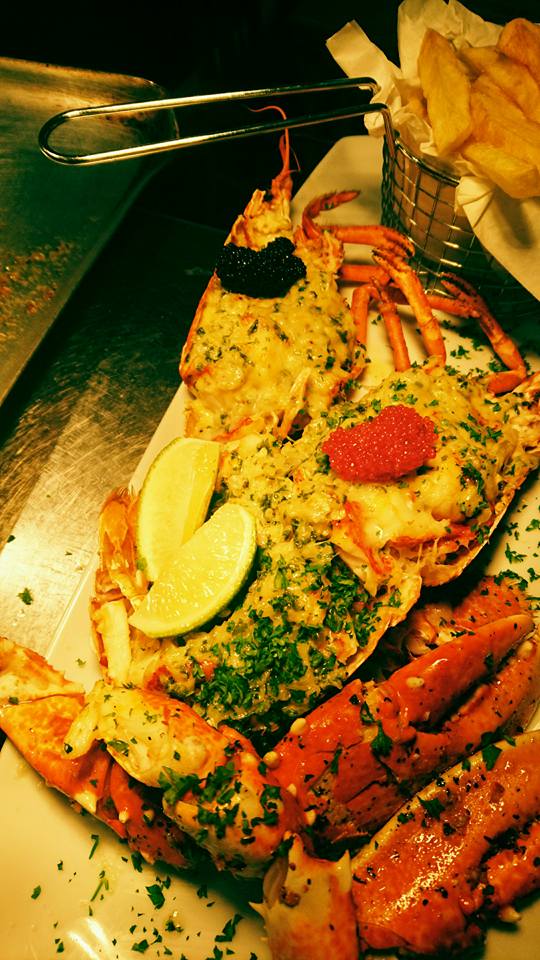 Regardless of what happens next, Eric and Joanna’s restaurant will continue to serve delicious food and will, perhaps, lift Weymouth towards the league of the great foodie capitals of the UK, towns such as Ludlow, Melton Mowbray and Padstow. Every dish quietly sublime, flavours married, ingredients local. What could be better? Tonight’s dinner date at Les Enfants Terribles will stay with me for a long time to come.

For Events, Deals, Promotions, and Competitions sign up to Snizl.com 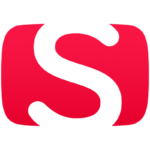 That sea bass looks amazing! It sounds like a great place and if I’m ever in Weymouth then I’d definitely try it.

That seafood looks delicious! Love of the photo of the Weymouth docks.