If you like beer, food, and merrymaking, then the best thing about autumn has got to be Oktoberfest.
The Munich Octoberfest is the largest beer and folk festival in the world! It now attracts around six million visitors per year who between them guzzle over seven million litres of beer!
The festival is held in a meadow, just a short tram ride from Munich’s city centre.

Octoberfest originally took place for sixteen days leading up to the first Sunday in October but has since been slightly modified to include German reunification day on October 3rd.
This year’s frothy fun festivities officially kicked off on Saturday, September 16 in Munich, and will carry on till Tuesday, October 3rd.

Oktoberfest has been celebrated since it started in 1810, in honour of the wedding of Crown Prince Ludwig of Bavaria and Princess Therese of Saxony-Hildburghausen.
Back in 1810, the burghers of Munich were invited to eat, drink, partake in parades, enjoy shooting displays, and have a horse race around the meadow at the edge of town. The event was such a huge success that it was decided to repeat the celebrations every year, and this year marks the 184th Munich Oktoberfest. 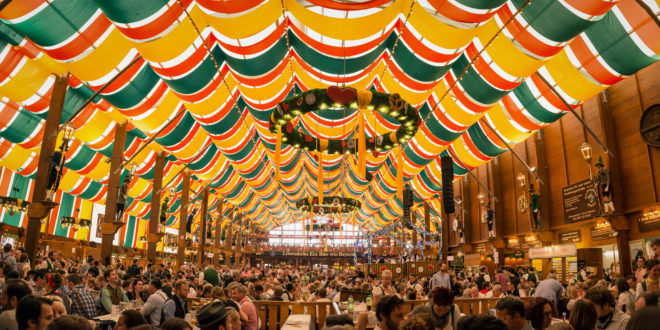 If it’s not from Munich, it’s not Oktoberfest!

When it comes to liquid refreshment, the only beer served comes from Munich’s breweries including the Paulaner, Spaten, Hacker-Pschorr, Augustiner, Hofbräu, and Löwenbräu. These beers are served in one-litre glasses (almost 2 pints – no half measures for you lightweights), the cheapest one setting you back €10.60 this year.
The drinking doesn’t start until the mayor taps the first keg and says “O’ zapft is!” (it’s tapped), and traditionally the first person to get a beer is the Minister-President of the State of Bavaria, but after that, the merriment begins.

To soak it all up…

Typically, at an authentic Oktoberfest celebration, you’ll be able to stuff yourself silly with a variety of scrumptious delights including; roasted chicken and wild oxen, Bratwurst, knuckles of pork, Sauerkraut, freshly smoked fish, giant pretzels, and lots of colourful gingerbread creations complete with sweet messages made of icing called “Lebkuchen”.

The opening day of the festival is marked by a colourful grand parade of floats and people in a variety of costumes including Lederhosen for men and Dirndl for women, winding its way through the streets of Munich.
Believe it or not, Oktoberfest is also aimed at families and includes a variety of fairground attractions from the thrill-seeking, to the gentler old-fashioned merry-go-round known as the “Krinoline”.
You’ll find traditional Bavarian music, folk dance, and live band entertainment to entice you to dance the day away, as well as, a variety of shows, the Costume und Riflemen’s Procession, and the open-air big band concert. There are also shooting galleries and candyfloss stalls. 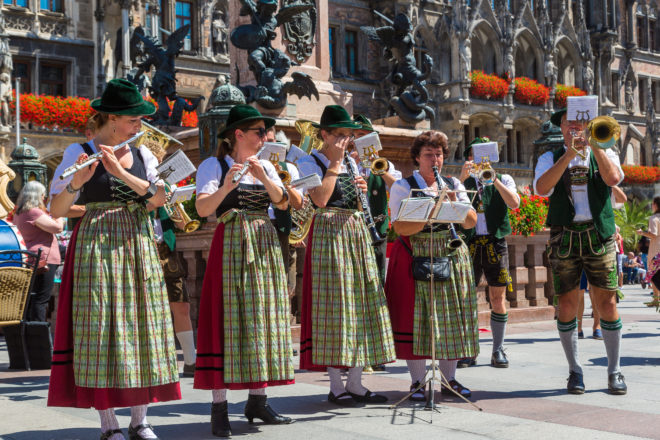 For a full detailed programme please follow this link – https://www.oktoberfest.de/en/

In 2008, a Bavarian waitress named Anita Schwartz broke the record for carrying the most beer steins at once. She managed to balance 19 full beer steins (5 in each hand, and 9 more balanced on top), and walk with them for 40 metres without them spilling, before placing them on a table!!! 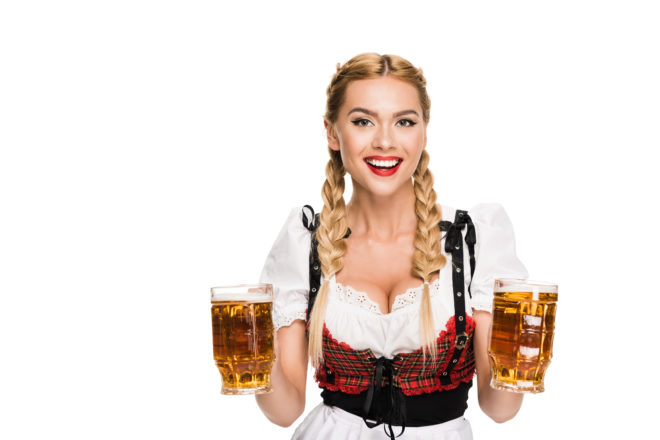 Not in Munich? No worries!

Although the official Oktoberfest celebration takes place in Munich, Oktoberfest has gone global with celebrations now taking place all around the world, including the UK.
The traditional German festival is more popular than ever before in the UK, so Brits no longer need to shell out on expensive flights and hotels to join the party,!
Oktoberfest events are happening in London as well as numerous other cities across the UK. Erdinger Oktoberfest is the biggest authentic Oktoberfest event in the UK, launching between October 5 and 22. Organisers are shipping more than 250,000 pints of Fischers Hell lager and Erdinger to satisfy the thirst of up to 5,000 attendees each night.

Check out the links below for a selection of events…

If you can’t make it out to an event, you can still enjoy a drink at home, as supermarkets are also stocking up with Oktoberfest-themed booze – check out Lidl’s range starting at just 59p