Christmas is here…nearly. And so is the worldwide Coca-Cola Christmas Truck Tour 2017! The time has come, and you could see the iconic big red truck in a city near you! 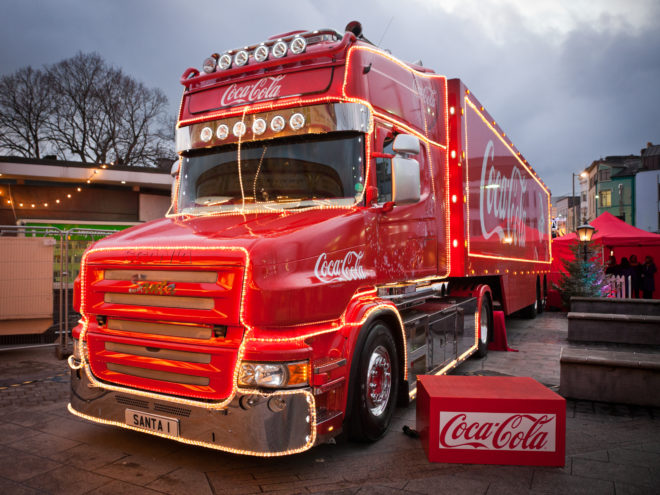 The big red truck first appeared on our screens in 1995 and it has become a tradition for Coca-Cola. The past 20 years of touring since being launched on TV has brought the young and old together in the Wintery months of November and December!

in 1940 The ‘Christmas Caravan III’ advert was made and was broadcasted across 100+ countries. It’s still commonly used today and remains one of the most used TV commercials ever made.

The Coca-Cola Santa Claus, created by Haddon Sunblom, first appeared in advertising in 1931. This is the exact portrayal of how nearly the whole globe sees Santa clause, with the traditional red outfit, white fury cuffs, long silver beard and a big belly!

The effects on the first ever TV Commercial for the Coca-Cola Truck were created by the industrial company Light and Magic – the same company that created the effects for the Star Wars movies – No wonder it has so many fans!

Each year, the Coca-Cola Truck visits more than 40 locations up and down the UK.

Between the years 2001 and 2007, Coca-Cola attempted to change the campaign and ditch the truck, but because of the uproar of fans, they came back to the traditional advertising!

Usually, The Coca-Cola trucks are accompanied by a live Christmas Choir or loud Christmas music through speakers. Really creating that magical festiveness!

Matt Smith used Twitter to raise awareness against Cystic Fibrosis. his posts went viral, so Coca-cola invited him to drive the big red truck, being the first member of the public to drive one!

If you enjoyed those facts and want to see the big red Coca-Cola truck for yourself, head to their Snizl page for the UK visiting dates: